Five cranial lateral line canal phenotypes are found among bony fishes (Webb, 2014b). Widened canals are known to be more sensitive than narrow canals to hydrodynamic stimuli and are considered to be an adaptation for the non-visual detection of prey.  However, species with widened canals that are also suitable for laboratory studies are rare. We are using two species of Lake Malawi (Africa) cichlid fishes (Aulonocara stuartgranti [widened canals], and Tramitichromis sp. [narrow canals]) for comparative anatomical, developmental, and behavioral studies that seek to understand structure-function-behavioral relationships in the lateral line system. Outcomes of this work have important implications for our understanding of the evolution of feeding habits of cichlids in the African Rift Lakes, of marine and freshwater fishes that feed on benthic prey, and of fishes in disturbed, eutrophic habitats in which non-visual predators may have an ecological advantage. 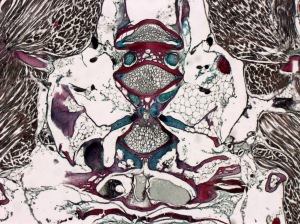 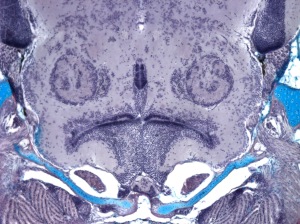 Resources Available for Use by Collaborators

Histology – Ontogenetic series (hatch through juvenile) of all of our study species (Metriaclima zebra, Labeotropheus fuelleborni, Tramitichromis sp., Aulonocara baenschi and A. stuartgranti) were paraffin-embedded and serial transverse sections (8µm thickness) of the head of larvae and juveniles were generated. Tissue was stained with the HBQ stain (BK Hall, 1986), which highlights cell nuclei, bone, cartilage and connective tissue. In addition to its utility for the analysis of the development of the lateral line system (neuromasts and canals), this material is also suitable for analyses of other aspects of the teleost head, including the skeleton, sensory systems (olfactory organs, taste buds, ear, retina) and central nervous system. See: Bird and Webb, 2014; Webb et al. 2014.

Potential collaborators interested in using any of this this material or using images derived from this material for use in publications are encouraged to contact us.